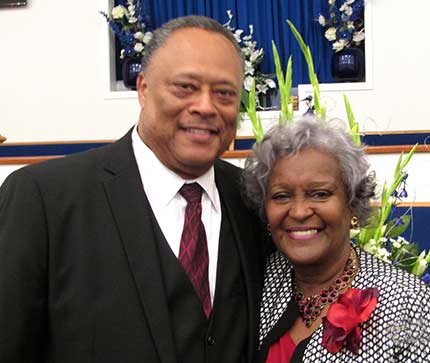 Reverend Spencer faithfully served as Associate Pastor of Calvary Baptist Church. As the Associate Pastor, he assisted the Senior Pastor in providing pastoral care, Christian education, counseling, administrations, and he served as liaison to thirty-four ministries. He has also made several missionary trips to Haiti and Jamaica as Minister of the Calvary Baptist Church Foreign and Domestic Outreach Ministry. In addition to being active in the ministries of Calvary Baptist Church, Reverend Spencer served the Morristown community as a Boy Scout Troop Leader; he served as President of the Morristown Community Development Corporation (an organization focused on improving housing and living conditions for Morristown, New Jersey residents); he was also a Member of the BEST Organization providing mentoring to Black male youth of Morris County, and he was a member of the Lions Club International.

Reverend Spencer joined First Baptist Missionary Baptist Church in August, 2006, and actively served as an Associate Minister under the pastorate of his pastor, friend and mentor, Reverend Dr. Willie E. Givens, Jr. On February 13, 2017, Reverend Spencer was called to pastor First Missionary Baptist Church in Summerville, South Carolina. He has devoted his ministry to educating and empowering the congregation to live as citizens of the Kingdom of God. Reverend Spencer served as a Morris College Extension Class instructor.

Reverend Adam Spencer, Sr., is a retired Senior Manager/Associate Director with Verizon Wireless Corporation, North Charleston. He earned a Bachelor of Science degree in Electrical Engineering from Southern University in Baton Rouge, Louisiana, and a Master of Divinity degree with a focus on Pastoral Ministry from Drew University Theological School in Madison, New Jersey. He also visited the Holy Land as part of His Old Testament studies. He was elected President of the Black Ministerial Caucus at Drew Theological School. Reverend Spencer pledged Phi Beta Sigma while at Southern University.

As a servant in the Kingdom of God, Reverend Spencer's favorite scripture is, "But my God shall supply all your need according to His riches in glory by Christ Jesus." Philippians 4:19 (KJV)